Melloblocco 2014 – day four, a final of climbing and beauty

The 11th Melloblocco came to an end today; once again the international bouldering meeting proved to be the biggest event of its kind worldwide, with 2600 registered climbers and more than 4000 people in Val Masino and Val di Mello

An instant of this morning’s Melloblocco 2014: two girls sun bathing on top of one of the boulders in the Mello garden. Who knows what they’re talking about. Perhaps they’re thinking of yesterday’s great party, or about the boulders they’ll climb later today. Or perhaps they’re simply enjoying the moment before the start to this final day. Life around the Mello Village begins to awake, slowly. And everything seems suspended beneath the blue water-coloured sky. In the background, high up on the mountains, snow sparkles brightly. There’s not a cloud in the sky.

Yes, here one can almost breath in beauty. It’s one of those moments that expands time, making it infinite. Like a slow, good breath, to be savoured fully. Perhaps it’s a mere coincidence, but it is this slow rhythm, this tranquility, beauty and brief moments of happiness, that accompanied the 11th Melloblocco. Indeed, in Val Masino the 2,600 splendid Melloblockers played to this tune and in doing so helped create an edition which, record numbers aside, was certainly one of the most beautiful and involving ever.

All this was clear right from the outset, for it was obvious on day one that this rhythm would clearly become this year’s sound track. This sensation was shared by many and could be perceived in many different small things. Because this is what Melloblocco, like climbing in general and bouldering in particular, is all about. Minor details and unrepeatable moments that, put together, lead to the summit. In short, like a climb and like in life in general, what counts at Mello is the greater journey. How you live the “here and now” in this Wondervalley. And so the Melloblocco 2014 journey experienced – naturally – plenty of climbing. Great climbing actually, such as that provided by the champions, but also by all other climbers, even by the absolute beginners. A quick look at their smiles sufficed to see that everyone shared the same love.

The journey was also rendered unique by the packed “cinema” nights and video-experiences put on by many top climbers, as well as the meetings with climbing and adventure legends such as Stefan Glowacz, to whom the Melloblockers gave a memorable standing ovation. And then there was the beautiful and intense theatre piece with the actors Fabris and Bicocchi who interpreted Joe Simpson’s Touching the Void. The spectators were touched and the applause at the end was immense, sincere and genuine. This Mello theatre was both an experiment and a bet… and the organisers couldn’t have hoped for a more convincing answer. Just as one couldn’t have hoped for a better sensibilisation campaign promoted by Climbing for Life for bone marrow donations: more that 30 “tissue types” are a superb result.

Talking of hopes: perhaps the key to Melloblocco’s success, to that mysterious and almost impalpable event spirit that is handed down from year to year, lies in the fact that during this edition there were possibly more young Melloblockers than ever before. It’s almost as if this meeting in Val Masino and Val di Mello represents a legend of sorts, but also a kind of initiation rite that cannot be disregarded.

It has to be said that many of these youngsters have grown up with Melloblocco. Many came here for the first time when they were still toddlers, accompanied by their climbing parents. In the meantime many of them have become impressively strong. And, looking at them, it’s nice to think and believe that the future has grown up here in the valley, for a better tomorrow. Also because many of these new hopes and confirmed talents are girls… one of the driving forces of Mello and the overall joy it expresses.

Talking of forces and new strengths, one must obviously mention the special 9+ 9 (difficult) competition circuit reserved to the very best. This year the classic game within the greater Melloblocco game was truly noteworthy. First of all thanks to the beauty of the problems found, cleaned and set by the Mello artist Simone Pedeferri together with his entire team. And then because, apart from the noteworthy sends, this “competition” was interpreted with truly unique tranquility and fair play by everyone.

In the women’s event Russia’s Yulia Abramchuk and France’s Mélissa Le Nevé won the “comp” with 8 out of 9 tops. Just behind them, with 7 problems sent, were Barbara Zangerl from Austria, Italy’s Jenny Lavarda and this year’s revelation, 14-year-old Giorgia Tesio from nearby Cuneo. Checking in with 6 tops were the two Italians Giada Zampa and Alexandra Ladurner, while 4th place went to Federica Mingolla thanks to her 5 tops. In the end only three problems, “El Calamar”, “Hell Boy” and “Off With Belly” remained unclimbed: another great challenge and good reason to come back to the valley!

While the Melloblockers bid goodbye to the valley from the enchanted garden in the Filorera Mountain Sports Centre, all that remains is to wish everyone a safe journey to… Melloblocco 2015. 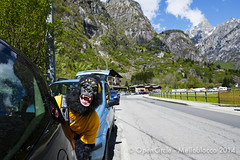 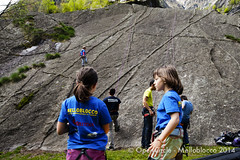 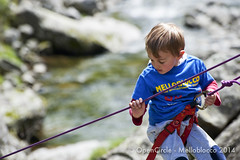 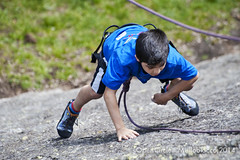 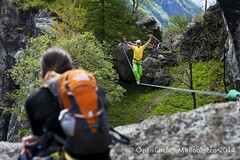 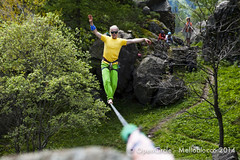 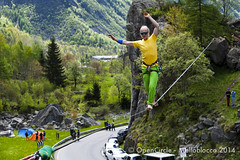 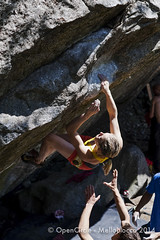 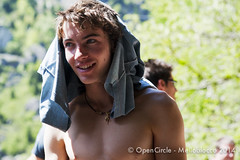 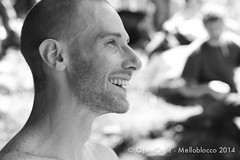 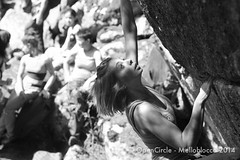 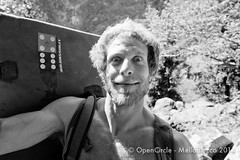 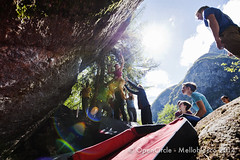 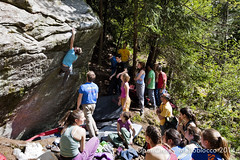 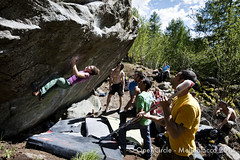 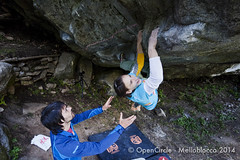 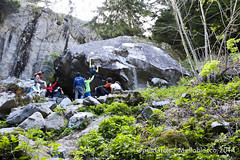 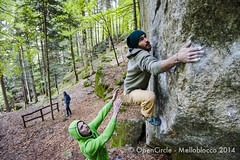 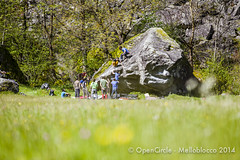 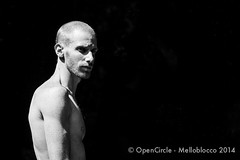