Day 2 of Melloblocco started with a light drizzle and this gave way to the sun in the afternoon. In any case rain didn’t stop play, climbing continued as more than 1400 reached Val di Mello. Full house is expected on Saturday and Sunday.

What do you do if it rains at Melloblocco? You cover the competition problems (4+1 today). And then you climb, or you ponder, or simply hang around and wait to climb. Many did this. In the meantime perhaps you dabble in a bit of yoga (two sessions programmed this year, one in the morning and one at night). And then you talk, of course, about climbing and more. And then there are those who think. Many chose this option, seeing that yesterday they climbed from dawn till dusk and a little rest is just what their fingers needed after stroking yesterday’s “gentle” granite.

If you asked around this morning what the weather would be like tomorrow, everyone replied they’d climb regardless of the rain and that anyways, the sun would shine. And in truth this is exactly what the weather forecast has predicted. Just like the sun this afternoon, that appeared at 16:00. What more can you ask for?

So Mello kicked off again. And who cared about the drizzle that continued to fall onto the boulders, rock faces and meadows? The 1400 Melloblockers who had flocked to the valley certainly weren’t put off. Also because the veterans had seen far worse… And also because between tomorrow and Sunday the rest of the troupe are expected: the flow of climbers arriving here has never ceased and there are new arrivals even now.

The new provisional ranking of 9 + 9 competition boulders – that resulted in Russia’s Yulia Abramchuk winning the special trip to Bilbao sponsored by Red Bull for the first athlete to send 5 problems – is led by Gabriele Moroni and Stefano Ghisolfi with 5 tops, while the women’s ranking is led by Jenny Lavarda, Barbara Zangerl, Mélissa Le Nevé and Yulia Abramchuk who all sent 5 problems.

But the game isn’t over yet, also because top climbers continue to reach the valley. All are gunning for the Grand Slam of 9 out of 9 problems. A real undertaking, especially in the men’s event seeing that 2 of their comp problems have been deemed “almost impossible.” We’ll find out more tomorrow. In the meantime though it’s time for some Mello wine tasting and, considering yesterday’s success, we expect full house this evening. Also because there’s more to life than bouldering.

The evening program and celebrations continue with climbing’s strong man Stevie Haston who will introduce the latest Grivel products, followed by Stefan Glowacz and his “At the End of the World – on Baffin Island” presented by Marmot. This will then by followed by Mayan Smith Gobat, Ben Rueck and Sachi Amma and their “Climbing around the world – Some insights from the adidas climbing team about their projects” and Change, staring Adam Ondra, presented by Montura. And to cap it all, Dj Diego Ritz will take over the console. And the climbing festival, that goes well beyond climbing itself, continues… 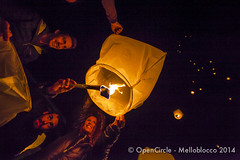 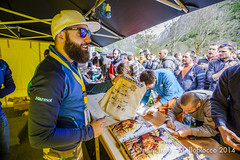 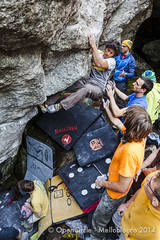 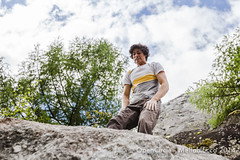 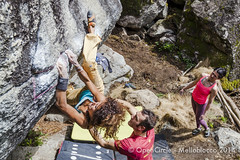 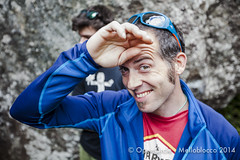 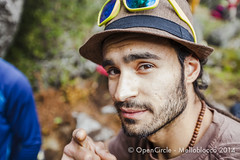 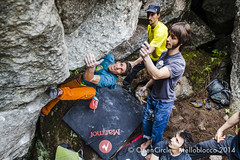 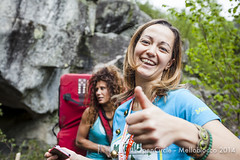 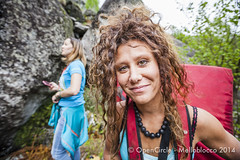 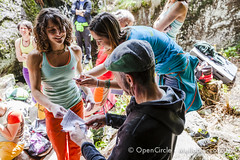 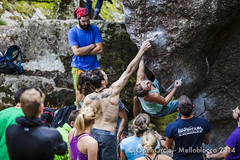 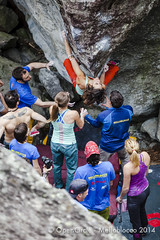 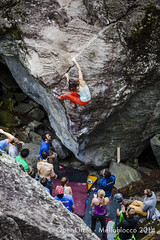 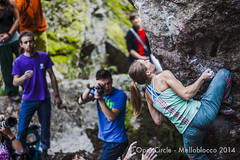 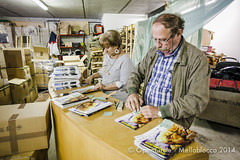 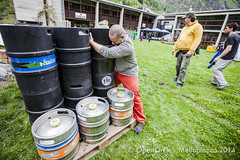 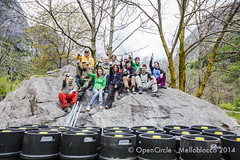 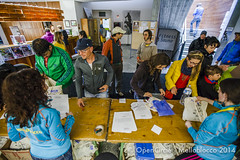 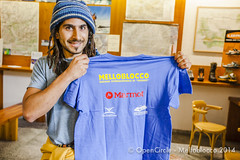